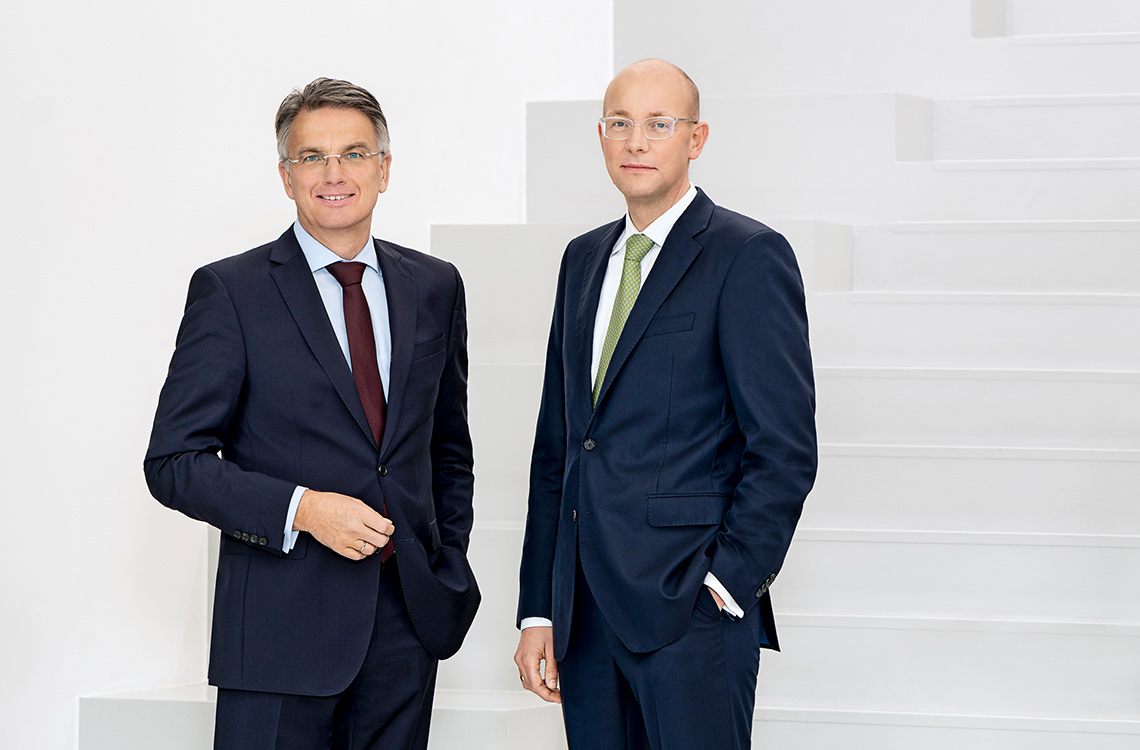 The DZ BANK Group’s business performance was very encouraging in the first half of 2021. At €1.83 billion, profit before taxes was more than three times higher than in the first half of 2020, far exceeding the figure that we had expected at the start of this year. This exceptional result, which we achieved despite the ongoing challenges, highlights the strength of our banking group. Nearly all of the entities in the DZ BANK Group delivered a healthy business performance and generated further growth.

“This exceptional result, which we achieved despite the ongoing challenges, highlights the strength of our banking group. Nearly all of the entities in the DZ BANK Group delivered a healthy business performance and generated further growth.“

This result was underpinned by robust economic growth and the uptrend in the capital markets. Following an uncertain start to 2021, the German economy was able to stage a marked recovery as coronavirus case numbers fell steadily and vaccination programs gathered pace. The anticipated wave of insolvencies has not materialized so far, despite the suspension of the obligation to file for insolvency having now expired. Furthermore, business sentiment is improving noticeably. Alongside the economic recovery, the capital markets were buoyed by optimism and new record highs. Because it is an institutional investor, the DZ BANK Group is highly dependent on changes in the markets and is thus prone to earnings volatility.

The determining factors for our financial results for the first half of the year were a very good operating performance, an unremarkable risk situation, and upbeat sentiment in the capital markets. Union Investment’s very strong contribution to profits reflects both sustained volume growth and a rise in performance-related income components. R+V Versicherung’s business performance was heavily impacted by the pandemic in the prior-year period. Profit before taxes increased sharply in the reporting period. The DZ BANK Group’s banking business also fared very well: DZ HYP and TeamBank both reported a healthy profit before taxes thanks to their strong operating performance and an unremarkable level of loss allowances. The same was true of the central institution and corporate bank, whose capital markets business flourished on the back of the economic recovery. Gains and losses on trading activities deteriorated year on year owing to IFRS-related valuation effects in connection with own issues. In corporate banking, the central institution and corporate bank was able to maintain its strong position. Good progress is being made with the scaling back of DVB Bank, which saw a further substantial reduction of the portfolio, the successful completion of the two remaining disposals, and reversals of loss allowances.

The key results in detail:

The DZ BANK Group’s net interest income amounted to €1.42 billion, which was lower than the figure for the first half of 2020 of €1.51 billion. The net interest income of the central institution and corporate bank increased, whereas interest income fell sharply at Bausparkasse Schwäbisch Hall and at DVB Bank owing to the reduction of the portfolio. Net fee and commission income swelled to €1.60 billion (first half of 2020: €1.05 billion) thanks to very strong growth at Union Investment. The central institution and corporate bank also contributed to this increase. In its bond issuance business, the central institution and corporate bank recorded a significant year-on-year increase. However, gains and losses on trading activities deteriorated to €0 million (first half of 2020: net gain of €539 million) as a result of IFRS-related valuation effects in connection with own issues in the period under review. Gains and losses on investments improved to a net gain of €37 million (first half of 2020: net loss of €15 million). This was due to the absence of negative non-recurring items that had adversely affected the prior-year figure. Other gains and losses on valuation of financial instruments improved to a net gain of €203 million (first half of 2020: net loss of €247 million), primarily because of positive valuation effects at DVB Bank and in DZ HYP’s government bond portfolio and because of positive changes in the valuation of guarantee commitments at Union Investment. Net income from insurance business, which had been severely affected by unfavorable equity market and spread movements triggered by the COVID-19 pandemic in the prior-year period, rose sharply again to reach €522 million on the back of a healthy operating performance and the recovery of the capital markets (first half of 2020: €124 million). Loss allowances amounted to a net reversal of €114 million (first half of 2020: net addition of €522 million) in view of the improved economic outlook, particularly at the central institution and corporate bank and at DVB Bank. Administrative expenses increased slightly to stand at €2.14 billion due to a higher bank levy and contributions to the BVR protection scheme (first half of 2020: €2.02 billion). In addition, the ZBI Group was consolidated within Union Investment for the first time.

The DZ BANK Group’s very satisfying business performance reflects the high level of dedication shown by our employees. We would like to express our thanks and appreciation to them.

The DZ BANK Group’s capital adequacy continued to strengthen, partly due to proactive management of riskweighted assets. At 15.4 percent as at June 30, 2021 (December 31, 2020: 15.3 percent), the group’s common equity Tier 1 capital ratio remained well above the market average. The leverage ratio stood at 7.2 percent. Moreover, DZ BANK AG’s healthy capital and liquidity position enabled it to routinely terminate and repay all outstanding Tier 1 issues in a total amount of €1.4 billion in the first half of 2021.

We welcome the European Central Bank’s decision to lift all of the restrictions on dividends at the end of the third quarter of 2021. These restrictions have been in place since the start of the pandemic. As planned, we will distribute an additional dividend to our shareholders following the Extraordinary General Meeting scheduled for the fourth quarter. In this year’s EU-wide stress test conducted by the European Banking Authority (EBA), the DZ BANK Group again demonstrated the strength of its capital base and the robustness of its business model. It achieved an above-average result compared with the other major German banks.

Our economists predict growth of 2.7 percent for the German economy in 2021. However, a setback in the economic recovery cannot be ruled out given the spread of new variants of the virus and the consequences of the flooding that affected some parts of Germany. We will therefore keep a very close eye on possible risks in the second half of the year. Despite these uncertainties, we are confident of being able to generate further growth in the remaining months of 2021. However, our financial performance is likely to lose significant momentum in the second half of the year.

“Looking to the future, we want to continue to raise our profile as a robust and effective financial services provider and expand our market share in all areas of business.“

Looking to the future, we want to continue to raise our profile as a robust and effective financial services provider and expand our market share in all areas of business. We passed significant milestones in recent months. In Capital Markets business, for example, DZ BANK participated three times in the European Union’s SURE bonds and was one of the five lead underwriters for the placement of the first EU bond in the context of the Next Generation Europe recovery fund. The volume of supranational, government, and quasi-government bond issues that we supported was up by 150 percent in the first half of 2021, helping us toward our goal of always being a first port of call for major investment briefs. In Corporate Banking, the crisis has powerfully highlighted the enduring strength of our customer relationships. The volume of lending to corporate customers held steady despite fierce competition. Income from cross-selling rose by 5 percent compared with the prior-year period. We continue to be a sought-after funding partner for investment in the transformation of the economy. In Transaction Banking too, we are systematically evolving. Payments processing should remain a major source of income for the cooperative banks. We are following developments in digitalization and internationalization of the business as a matter of high strategic priority and are playing an active role in German and international initiatives.

From a strategic perspective, we are taking decisive action at three levels. Each entity in the DZ BANK Group follows its own market-oriented, ambitious strategy. At the same time, we are working systematically to unlock cross-organizational potential for greater efficiency – such as in purchasing – and seize growth opportunities. We are also heavily involved in the strategic development of the cooperative financial network in the context of the digitalization initiative and strategic agenda. Investment is currently focused on digitalizing the customer interface, expanding the platform business, and modernizing the IT and process architecture. We are also driving the development of solutions and innovations both in payments processing and those based on blockchain technologies.

In addition to the continued digitalization of products and processes, sustainability will be a dominant theme in the financial institutions’ core business in the years ahead. The DZ BANK Group believes that it can rise to this challenge. We have systematically refined our ESG profile in recent months. As well as enshrining sustainability aspects in our strategic planning processes, we are primarily focusing on setting out clear criteria, metrics, and targets for our business portfolios. The analytical framework that we have developed for this purpose equips us to work closely with our customers to support their transformation. Despite the urgency, a sustained successful transformation requires us to bring all economic players on board. This will also open up considerable market opportunities for the cooperative financial network which we want to exploit together.

The DZ BANK Internet pages use cookies in order to provide services. To improve quality, we also use cookies which are stored after the session has ended. The data so collected are anonymous. Further information under: Data Protection.